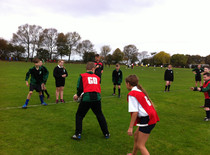 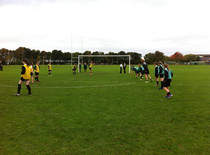 Longcroft continued to celebrate the Rugby World Cup with a festival of touch rugby for all Y7 students.

All 210 Y7 students were put into 20 mixed teams for the morning of competition.

4 groups played a round robin format and on 8 pitches. Game were controlled and refereed by rugby playing students from Y10-13. It was quite a spectacle!

After the group games there were play offs and the top 2 teams were given rugby festival cups as prizes.

The photos show a little of the action......