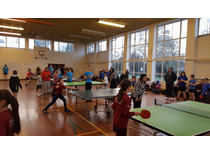 This was the second year that Longcroft have run a festival of table tennis aimed at encouraging those who do not usually represent their school in other sports to come and 'have a go'. Again it proved a popular event with 14 teams entered. With snow on the ground only 11 teams made it on the night but they all played at least 7 games.

It was impressive to see how the serving technique and length of rallies developed as they played.

All teams won at least one of their fixtures. Both Minster teams played particularly well but St.Johns and Molescroft shared the medals.

Thanks again to the Longcroft leader helpers and well done to all who played.