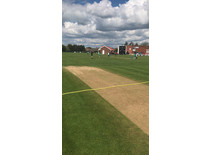 Tuesday saw the Beverley Clusters Cricket festival. Six teams attended the event held at Beverley Town Cricket Club. The tournament comprised of a three rounds, with a Quarter Final, Semi Final and Final. Two teams had a bye to the semi-finals due to having six teams. In the first games, St Johns beat Leconfield and St Marys beat Molescroft. This set up the first semi-final of St Marys vs Walkington, a competitive match was eventually won by St Marys and St John beat Swinemoor in the other semi-final. The final saw St John vs St Marys and this went down to the last ball, St Marys winning by 4 runs, as they had one less out in the match. St Marys go through to represent our cluster at regional finals. Well done to all that took part and thanks to the BGS leaders for umpiring the event and Beverley Town Cricket Club for hosting the festival.