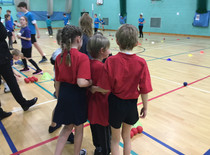 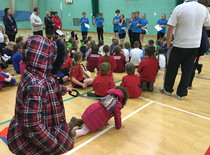 12 out of the 13 Longcroft cluster schools took part in the Boccia festival at Longcroft on Tuesday. 10 schools brought A and B teams so the format was a little complicated!

There was a Longcroft leader in each lane to score and they were supported by Mr Watts from Kingsmill school and the primary school teachers.

All teams played at least 6 matches and some managed 8 and this meant the scoring was a little complicated......Mrs Fitzpatrick had to work out averages to discover that the winners of each pool were St.Johns blue and Swinemoor blue.

For many of the children taking part it was their first experience of inter school competition, the feedback from schools was very positive and the teams enjoyed the event.

We look forward to welcoming them again soon.